Revealing Kia - A not at all lost girl 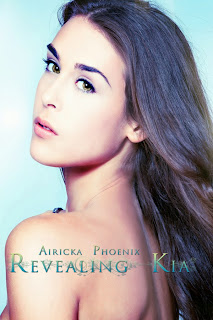 Okay, so I got this book for an honest review and I'm so super glad I did! I read book one and already loved it like nothing else... And let me tell you... No, let's start with what the book is about...

The events of Claudia’s party were nothing more than a distant memory as far as Kia was concerned. She was ready to resume her life as though that night had never happened. But it’s a slippery slope keeping a secret and Kia’s about to learn just how hard when she’s faced with the truth and the consequences of her decision. Adam Chaves was no stranger to girls wanting him. He was no stranger to breaking hearts, although never intentionally. What he didn’t understand was how Kia could undress him, touch him, burn him with her eyes and still keep him at arm’s length when it was evident how much it cost her. But what Kia didn’t realize was that he had never given up on anything in his life and he wasn’t about to start now. He would have his girl even if it meant he had to kidnap her to do it.

That's the first thing I can think of when I think of this book.

Before I get to all the fan-girling I'd really like to start out with the serious topic that Airicka tackles in the book and her prologue. Mobbing. I've never been a victim of strong bullying, just the 'normal' version everyone of us surely has dealt with over the time being, but I have to say that I love everything that Airicka's characters do concerning it. Nessie's strength to just ignore it, no matter how much it breaks her inside, and Kia's way of standing up for her is just... I swear, everyone needs a friend like Kia and I'm really proud she went up against that.
For someone who has a mother that actually dealt with depression for a while I know how hard it is for the people around them to recognize it as something that needs to be taken seriously. I am glad that Nessie's mother eventually is ready to stand up for her children.

Now to the less serious and still not less amazing parts...

That's all I can say when it comes to Adam. Man, this guy really is something and the scene in the kitchen? Wow... I was feeling VERY hot while reading that.
What I actually liked most about this whole book was Adam coming down the stairs with his glasses. There's nothing better about a seemingly perfect guy having just the slightest imperfection. Let's be honest here, no one could keep up with a perfect guy... And no one would want to. But Adam its just the right way imperfect for me!

Now about Kia... Gee, I love her. I love everything about her. I love her loyalty, I love her clumsiness and I love her honesty. No matter how much she wants Adam, she still has her priorities set straight and really follows what she believes. She is a great friend to Nessie, no matter what she thinks, and she is a great daughter to her mother. I really admire that Airicka's main goes up against people, not hiding that her mother actually is living in a lesbian relationship. She is ready to defend them and take on all prejudices for them and in return they prove that conventional is not necessary to be amazing.

My favorite scene (since it's constantly replaying in my head-movie-theater) is the one where Adam teaches Kia how to ski. Them out in a cabin? WOW. Me want. Seriously.

Now all I have left to say is that I am really sad this was the conclusion to the lost girl -series, but it was just great!

This book is sooooo good. I'm gonna read it again very soon because I just can't stay away from Adam...

(All pictures found on google and not owned by me.)