This much is true - Katherine Owen 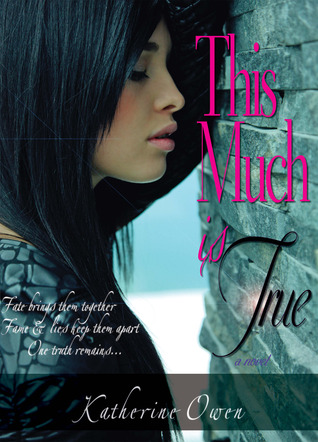 Synopsis: Both on the verge of fame. A ballerina who lies. A baseball player who believes her. Well, the truth changes everything.

Since Valentine's Day, Tally Landon has owned the most tragic story at Paly High. Now, she just wants to graduate, pursue her ballet career in New York, and leave this personal tragedy of hers far behind. Her best friend convinces her to attend one last party--a college party--where she meets Stanford's latest baseball wonder. Tally has a little fun at this guy's expense when she lies about her age and who she really is, intent on being someone else for just one night. After all, what's the harm in a few innocent lies, especially when she's so good at telling them?

Lincoln Presley's future is all mapped out. There is only baseball. With the big leagues circling with a lucrative offer, the star pitcher is solely focused upon securing his future. His cousin's party serves as a welcome distraction but then he sees the girl from Valentine's Day--the one he rescued from the burning wreckage on the 101. He can't quite hide his disappointment when she appears to look right through him, obviously not remembering him at all. Linc vows to learn her name at least. What would be the harm in getting to know this girl? What's the worst that can happen?

Fate brings them together. Fame & lies tear them apart. One truth remains..."

Already yesterday when I was almost finished with this book was I trying to think of what to say to you guys about this book. And I haven't really come up with anything. Now, saying that, that's not saying this book is bad, because believe me, it's anything but.

I am gonna warn you that this review will include a lot of rambling nonsense and I don't think it will make much sense. Because to be honest, I'm still reeling from it myself.

The story itself is pretty straight forward actually. Boy meets girl, they fall in loves with each other but life just keeps getting in the way. Right? Pretty straight forward. And yet the beauty of this book is the reality it portrays. That sometimes life just doesn't work the way we want it to and no matter what happens, no matter how badly we might want something, it's just not gonna work out.

Katherine Owen's style of writing just really sucked me in. I didn't realise it in the beginning but at some point I was so absorbed in the story and so invested in it, that I didn't wanna go to work and do all the things I usually do because I wanted, no I NEEDED to finish this book. Her writing just made it feel so close to you that you felt the character's pains, their hopes and you were also right there when those hopes were crushed like ice.

This book was gut wrenching, heartbreaking and so emotional that I felt like this most of the time:

The main characters as well, Linc and Tally, aren't always likeable characters. They make bad choices, they make mistakes, but the best thing about this book is that part of you always understands why they are doing the things they do. Not that you always agree with them. And believe me, there were a lot of times where I wanted to shake both of them so they would see sense....didn't work out so well.

So why should you read this book? Because it will not let you go. It will haunt you when you're not reading it, will make your heart break when you do, and yet there's always gonna be that hope. That hope that one day things will be okay again.

On another note: It is a rather long book. I was surprised to say the least, but I will let you know that every page is worth it and that there's not gonna be a point where you go: Is this EVER gonna end!