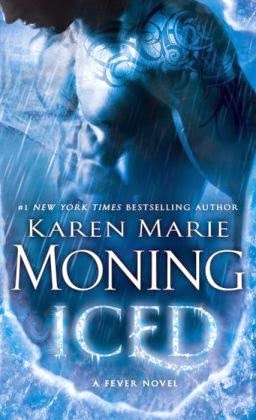 #1 New York Times bestselling author Karen Marie Moning picks up where Shadowfever leaves off with Iced, the first book in her hotly anticipated new urban paranormal trilogy set in the world of the blockbuster Fever series.
The year is 1 AWC—After the Wall Crash. The Fae are free and hunting us. It’s a war zone out there, and no two days are alike. I’m Dani O’Malley, the chaos-filled streets of Dublin are my home, and there’s no place I’d rather be.

Dani “Mega” O’Malley plays by her own set of rules—and in a world overrun by Dark Fae, her biggest rule is: Do what it takes to survive. Possessing rare talents and the all-powerful Sword of Light, Dani is more than equipped for the task. In fact, she’s one of the rare humans who can defend themselves against the Unseelie. But now, amid the pandemonium, her greatest gifts have turned into serious liabilities.

Dani’s ex–best friend, MacKayla Lane, wants her dead, the terrifying Unseelie princes have put a price on her head, and Inspector Jayne, the head of the police force, is after her sword and will stop at nothing to get it. What’s more, people are being mysteriously frozen to death all over the city, encased on the spot in sub-zero, icy tableaux.

When Dublin’s most seductive nightclub gets blanketed in hoarfrost, Dani finds herself at the mercy of Ryodan, the club’s ruthless, immortal owner. He needs her quick wit and exceptional skill to figure out what’s freezing Fae and humans dead in their tracks—and Ryodan will do anything to ensure her compliance.

Dodging bullets, fangs, and fists, Dani must strike treacherous bargains and make desperate alliances to save her beloved Dublin—before everything and everyone in it gets iced.

Awesome, awesome ride! I have to admit, I wasn't sure if I'd love a book from Dani as much. I wasn't sure if she could carry a book on her own, would I be interested, would it HOLD my interest? I was pleasantly surprised because I ended up loving the story, and enjoying Dani way more than I thought I would. In Shadowfever, she somewhat annoyed me but here she actually grew up a teensy bit.. plus she made me laugh!

I wasn't expecting that she would be more mature and making the best decisions, but she didn't disappoint me either. She is 14 and has seen more at her age than any normal 14 year old has, so I think she's more grown up than I've given her credit for. That being said, it was a little weird to see the depth of Christian's feelings because she IS still a tween. Ryodan at least is under control, but Christian is another story! However, I think this is in large part due to what he is becoming. I can understand people being freaked out by it but they have to understand that he proooobably wouldn't be this out of control if he wasn't turning unseelie, and not just any unseelie, but a 'death by sex' prince at that! Plus as he even explained, "waiting" is the name of the game here and those few years are nothing to him and Ryodan. Make no mistake though, I am rooting for Ryodan all the way! I feel for Christian and I really hope he can hold onto some of his humanity and maybe Dani will even help him with that..but Ry is who I can see her with in the future. And I hope she grows up fast!

It's also not that unbelievable to me that these men would see something in her that's new and exciting in these desperate times. From Ryodan's standpoint, being alive for thousands of years... then a girl comes along who is just like him, with an attitude the size of Texas, and that fights as well as any of his men??? This is probably the first time in forever that he is INTRIGUED by a human, or even a female! If your days are always the same, I'd take any excitement and newness I could get. I can't wait to see if Dani brings out a different side to Ry's personality, maybe softening him a bit. Then again, when a flame hits a stick of dynomite, it explodes so.... maybe no softening will ever happen! LoL.

It was heartbreaking to hear what Dani went through as a child and I'm glad we finally got a deeper look into her past. I love that she holds on to her independence with everything she's got. Ry might be trying to help her by wanting her to stay at his club, but she sees it as just another cage and rightfully so. I think he has to realize Dani needs a different approach when trying to "tame" her!

Leaving you with a favorite quote: 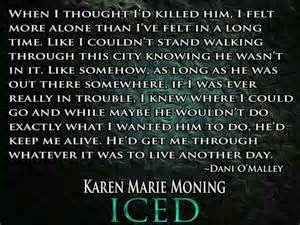 *all pictures found on google