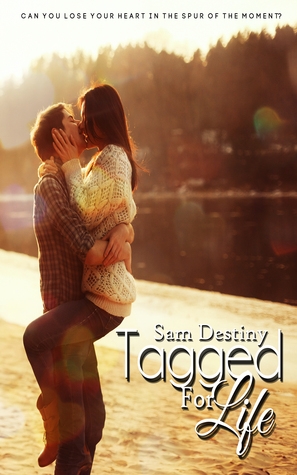 "A career. A perfect future. Everything he could wish for. That’s what Corporal Jesse ‘Jazz’ Connor thinks about his life. He can’t understand why his comrades feel the need to find a girl and settle down when the Army career latter has so many steps to climb. Up, up, up; that’s where he’s looking – and that’s the reason, too, why he stumbles over the only thing that maybe can change his view on life forever: Tessa.

No job. No plan. An open future. That’s how Tessa Rowan likes to see her life as she starts a trip to see some friends half way across the world. And Jazz will be her first step to the new Tessa. Build up your confidence; show the world what you can do, that’s her new motto. The problem is that Jazz maybe turns out to be so much more than she could ever have hoped for – and still not be able to hold onto.

Together they need to find a way to make A and B come together with an ocean between them that threatens to drown everything – maybe even their love."

So about this book...where to start...oh man, it's so hard when all I really wanna tell you is to get this book now, right away!! Like NOW!!!!!

The story follows Tessa Rowan, who's stranded at a CA airport on her way to meet friends she has been dying to meet for a long time. Her luggage is lost, she's cold, hungry, tired and lost: not a good combination when you're stranded at an airport in a foreign country. But that's when Jazz shows up. His training in the military having taught him to help where he can. Helping out Tessa just seemed like the right thing to do. And that's where it all starts.

I'm not gonna get into the actual story much, because in the end, I want you to read all of it, but suffice to say that this story will have you laugh, cry, bang your head against the wall and rip your heart out. Kinda like this:

depending on which part of the book you're on.

The story will pull you in and not let you go until you finished it. It's simply as that. The writing flows easily, making you forget everything around you and drowning into the story that surrounds not only Tessa and Jazz, but also the characters that might seem secondary: Tessa's friends as well as Tank, Jazz' best friend, but are anything but. They are an integral part of this story, and it wouldn't be what it is without them. So while I'm not giving anything away storywise, I will tell you that it's beyond amazing, had me at the egde of my seat and at the same time I didn't want it to end. Youknow that feeling? That feeling when you read something and you love it so much you badly wanna get to the end to know what's going on and yet don't wanna finish because then it's just...over? Yeah, that's how I was with this book. And there needs to be more, simply as that. No matter what, I need more.

But then again, I always want more where Sam Destiny is concerned.

So, characters: Tessa is an amazing character. I mean, who of us doesn't know how it feels to be lost, to not know which direction your life is gonna head in the end, and where you wanna go. And it's a great thing to watch her throughout the book. How she deals with whatever life throws at her is just great. She's caring, loves her friends and has her heart at the right place. If I wouldn't have a best friend already, I would want Tessa to be it!!

Excuse me while I go and look for my brain again....

Jazz is AMAZING. Simple as that. There are so many books out there about bad boys, and while I absolutely love that, don't get me wrong, it's sooooooooo nice to see something different for a change. I love how he's one of the good guys, one of those guys that would bring down the world to be with the girl he loves. And sacrifice everything on the way. While Jazz is having his own set of problems to deal with in this book, he's still always there, always helping out and being a more than amazing friend to everyone. Honestly, if I wouldn't be married already, Jazz would just be what I would want! He's perfect, simple as that!! Like you know, the type of guy that you wanna jump basically the minute you see him, just because he doesn't only look the part, but behaves the part as well? Yes, that's him. So he's mine, in case anyone was wondering!!

And we can't forget the rest of the gang. Hils, Aimie, Em-Jay and Evy. I loved them all. There was something so special about the dynamic this group had. All of them have their ups and downs, but in the end, this group is a unit, sticking up for each other when trouble comes their way and protecting their own. Kinda like a herd. A herd that I would love to be a part of!! Thos girls are amazing, and I think I'm speaking for all of us when I say that we all wanna have friends like that. Friends, that no matter which time zone they are from, will always be there for you, kick people's ass' when the need is there, and laugh and cry with you when that's all you feel like doing. So yes, this group is something we all can relate to for sure.

But not only those girls, but also Tank I highly enjoyed. While he might not be the most likeable of the bunch at first, I still liked his character, because he brought something different to the table. And as Jazz' best friend, there were moments where his attitude or behavior, or simply the things he said, made me laugh out loud. So that also makes him an important part of the story, no matter what. And in the end, I also fell a little bit in love with Tank, because I'm a sucker for a hard exterior but soft inside. So yeah, sue me LOL

Alright, so what else? Do you NEED anything else to convince you that you need to read this book as soon as it's out??? I sure hope not!! Honestly, I want you to read this book and to fall in love with the story and the characters. It's a REAL story, with real people, that won't be all rainbows and unicorns, but that's what makes it so special.