The Reapers by Ali Winters 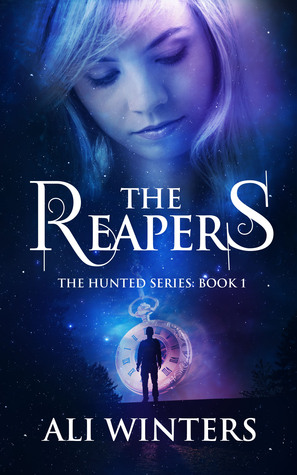 
Having been a reaper as long as she can remember, Nivian knows that what she does is essential in maintaining balance. After being assigned to a rushed mark she finds that there is more to this human than any other she has encountered.

Kain had been living an ordinary life without a second thought until he meets Nivian who turns his world upside down. He is thrust into a world of hunters and reapers. The keepers of life and death have been feuding for centuries over a reason no one can even remember.

With Kain having been marked for reaping, and Nivian being hunted, they forge a friendship and together must find the truth in order to keep balance in check. Wrong choices could destroy everything. As they journey they discover hidden histories, powers, and lies and truths that have been spun since the beginning of time. The consequence of failure, unimaginable.

I was really happy when Ali asked me to review her book for the blog, simply because I'm currently in a fantasy/paranormal mood and the book sounded just like something I would like.

This book tells the story of Nivian, a reaper already for decades, who all of the sudden has problems doing her job, only be cause HE's always there. Kain seems to disrupt her otherwise perfect work schedule, and Nivian cannot explain why. When slowly but steadily, the reason for Kain's existence comes to light, she's faced with the choice of trusting the people she had always been with or going against everything she had ever believed in.

So much for the story! As usual, I'm not giving much away, that's for sure! Nivian is a likeable character, that, even through the confusion that infuses her life eventually, tries to always make the best of things and trust her instincts. Kain himself is such a dorky and happy character. He has no idea about reapers and hunters and it's great to see him navigate through a world he didn't even know existed.

The book definitely had great potential, and it was a good book, but one major thing kept me from giving this book more than three stars, and that's the changes in POV. I usually don't mind changes in POV at all, I love them. The issue I had with this book was that POVs changed during chapters, even during paragraphs, and it got so confusing that I had to go back and reread several times to make sure I knew who was thinking what. That took some of the reading pleasure off for me. I think once Ali explores those POVs more in depth and really takes her time with it, this series can be great!! I for one have complete faith in her!!

So, despite that though, if you're looking for a really cool paranormal read, then I would recommend you give this debut author a chance!!!

I will definitely keep reading this series <3

3-book-boyfriends from me!
Always yours,
Yvi