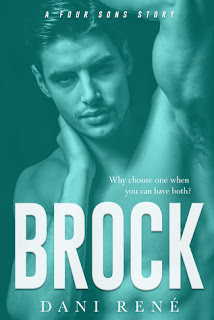 I am strong, athletic, and son to a man I always wanted to be.  I had made plans, thought I was on that path, and then a bullet stopped not just my father’s heart, but mine too.  I’ve been living a life I’m not meant to.  I want more. I want to escape.  And I found someone who’s given me a love I never thought possible.  My name is Brock Pearson. I am a free spirit who found happiness in an unexpected place. People assume I’ll be another heir to our empire, but my heart belongs elsewhere.

I have to admit that I was fully prepared for Camden to be my favorite Pearson, but then came Brock and holy hell… I love him. His anger at his father, but also the love for him… Dani René did amazing in portraying how torn he was.

I won’t lie, I loved the relationship between him and Ethan even before the two went official. The playfulness—that luckily didn’t get lost even after they took the next step—was something that made my heart race for Brock. I wanted him to be happy, and Ethan clearly managed to make him feel just that.
Enter Cami and Brock’s world is thrown into chaos. It’s a good one, but chaos nonetheless. What I most liked was how absolutely sure he was about everything he felt. There was no doubt, no fear of prejudices, just the feeling that he was going to do what he was going to do because fuck everyone else, he was in love with his best friend and nothing would change that. Seriously, this book took me by surprise and I am absolutely dying to dive into more Dani-René-books.

Well done, woman, on this book. I devoured it even while trying to read slower to make it last longer.

People, you totally need to read this book. (Imagine me with heart eyes now.)