The Kiss Thief by L.J. Shen 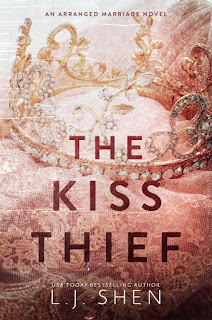 From USA Today and Washington Post bestselling author L.J. Shen comes an enemies-to-lovers romance with a twist... They say your first kiss should be earned. Mine was stolen by a devil in a masquerade mask under the black Chicago sky. They say the vows you take on your wedding day are sacred. Mine were broken before we left church. They say your heart only beats for one man. Mine split and bled for two rivals who fought for it until the bitter end. I was promised to Angelo Bandini, the heir to one of the most powerful families in the Chicago Outfit. Then taken by Senator Wolfe Keaton, who held my father’s sins over his head to force me into marriage.  They say that all great love stories have a happy ending. I, Francesca Rossi, found myself erasing and rewriting mine until the very last chapter. One kiss. Two men. Three lives. Entwined together. And somewhere between these two men, I had to find my forever.

I don’t usually do assholes. I mean, I don’t usually read them, but the blurb to The Kiss Thief totally had be curious and MAN, Wolfe has to be one of my favorite characters EVER. Like seriously. The way he was written, the way he acts… Even in his asshole-ness he’s perfection.

The book had me in its grip right from the beginning and I won’t lie, I dragged out finishing because I didn’t want it to end. I could’ve spent so many more pages with Wolfe and Francesca. The turns and twists had me gasping and pausing, and I wanted to take notes on how she wrote certain scenes because boy, I want to be able to write like LJ Shen. (Let’s face it, no one can, but… You know…)

I’d always suggest that book to EVERYONE. 2019 just started, but I already know it has to be one of my favorites this year.