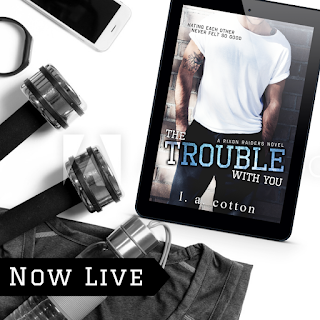 The Trouble With You - Blurb:

One year of life in her football obsessed town.
One year of nauseating school spirit.
Just one more year of her cruel step-brother Jason; and his cocky, arrogant, football-playing friends.
She hates them. Especially, Cameron Chase, the guy she thought was different.

He has it all; good looks, talent, and the charm to go with it.
He has colleges lined up at the door, all wanting a piece of Rixon Raiders star wide receiver.
Until something threatens everything he's ever worked for, and only one person can quiet the war raging inside him.
But he's supposed to hate her; his best friend's sister.

Then Hailee finds herself in the middle of a football prank gone wrong...

I’ve been a long-time fan of L.A. Cotton, but as it is with time, people evolve, change, grow. So, for a while there—while I still admitted the hell out of that lady—her romance books weren’t exactly my style anymore. I know people adored the hell out of them, but basketball (or really any other sport other than football) just isn’t my thing.
That doesn’t mean I stopped trying them all, and so I had to when she announced a new football series. *inhales deeply to not freak out* The Trouble With You seemed to be right up my alley, and yet… I was wary. Of course I was, because lately I don’t even know what I want in a book, so how can someone else GIVE me that?
Then came Cam. I mean… *takes a deep breath trying to control herself* No, there is no control. I devoured the book even though technically I’d been too busy. Literally. I had so much other shit going on, but I ignored that because I. Just. Had. To. Know. I had to read and see and know and know more and… AHHHHHH! This is such a Lianne book, I felt like coming home. Well, the way I defined a Lianne book for myself.
It had pain and heartache, and melting moments, and so many AWWWWWWs. So so many.
Also, Hailee is kick ass. She’s strong-willed and ready to do her own thing, to be her own person no matter what and I wanna be like Hailee. Naturally. I also want a Cam, but that’s a different story.

I’m not into bully romances usually (and yes, I know, I totally go against the current trend) but this one… It was well-written, fast-paced and I held my breath more than once, hoping and praying Cam and Hails can work it out. I mean… Come on, they just HAVE to have hot and sweaty sex because I needed to see Cam naked. (Don’t judge me, I’ve been single for too long.)
And then… THAT ENDING. FOR REAL. I mean… COME ON. (Don’t know what I mean? Only means you still are lucky and can read TTWY for the first time and I’m effing jealous of you.)
Either way, The Trouble With You was like coming home, like seeing things that you’d forgotten you missed and then want to tear up at. This book was home, comfort, memories, and friends all wrapped in one. Man, Lianne, I missed getting the chance to utterly fan-girl over you.

People, buy the book. The end.

Five out of five hot book-boyfriends