Showing posts from September, 2014
Show all

Synopsis: NICK  –  Leader of the half-breeds and the last true hero. He’s spent his life fighting a dark pull toward the gods. A pull he now knows is linked to his father Krónos and the Titan’s plan to escape from the Underworld. But Nick’s hidden powers are coveted by more than just his father. Imprisoned by Hades, Nick battles every form of torture imaginable as the sadistic god schemes to break him. Only one thing is keeping him sane. One woman who gives him the strength to fight the relentless darkness. She has a dangerous plan of her own, though, and as Nick’s powers grow stronger, even she might not be enough to alter his destiny. As the fate of the world hangs in the balance, Nick’s allegiances are tested. And no one knows whether he will choose to fight for good or succumb to the sinister lure of evil. Not even him. I got that book as an ARC from netgalley (man, I love that page!!) and I was super excited to start it. To be honest, I didn't read the books i
Post a Comment
Read more

Synopsis: " Welcome to New Vegas, a city once covered in bling, now blanketed in ice. Like much of the destroyed planet, the place knows only one temperature - freezing. But some things never change. The diamond in the ice desert is still a 24-hour hedonistic playground and nothing keeps the crowds away from the casino floors, never mind the rumors about sinister sorcery in its shadows. At the heart of this city is Natasha Kestal, a young blackjack dealer looking for a way out. Like many, she's heard of a mythical land simply called "the Blue." They say it's a paradise, where the sun still shines and the waters are turquoise. More importantly, it's a place where Nat won't be persecuted, even if her darkest secret comes to light. But passage to the Blue is treacherous, if not impossible, and her only shot is to bet on a ragtag crew of mercenaries led by a cocky runner named Ryan Wesson there. Danger and deceit await on every corner, even as Nat
Post a Comment
Read more

Since You've Been Gone by Mary Jennifer Payne

I was provided an ARC Copy by the Publisher through Netgalley for an honest review! Synopsis: " Is it possible to outrun your past? Fifteen-year-old Edie Fraser and her mother, Sydney, have been trying to do just that for five years. Now, things have gone from bad to worse. Not only has Edie had to move to another new school she's in a different country.   Sydney promises her that this is their chance at a fresh start, and Edie does her best to adjust to life in London, England, despite being targeted by the school bully. But when Sydney goes out to work the night shift and doesn't come home, Edie is terrified that the past has finally caught up with them.   Alone in a strange country, Edie is afraid to call the police for fear that she ll be sent back to her abusive father. Determined to find her mother, but with no idea where to start, she must now face the most difficult decision of her life." This was an okay book to me. I can't even pinpoi
Post a Comment
Read more

Synopsis: " This world is trying to kill Lily Proctor. Her life-threatening allergies keep her from enjoying experiences that others in her hometown of Salem take for granted, which is why she is determined to enjoy her first high school party with her best friend and longtime crush, Tristan. But after a humiliating incident in front of half her graduating class, Lily wishes she could just disappear. Suddenly, Lily is in a different Salem—one overrun with horrifying creatures and ruled by powerful women called Crucibles. Strongest and cruelest of them all is Lillian . . . Lily's other self in this alternate universe. What makes Lily weak at home is what makes her extraordinary in New Salem. In this confusing world, Lily is torn between responsibilities she can't hope to shoulder alone and a love she never expected." So this was me when I heard Josephine Angelini was bringing out a new book: This was a amazing beginning to a new series. I alread
Post a Comment
Read more

Defiance and Deception by CJ Redwine 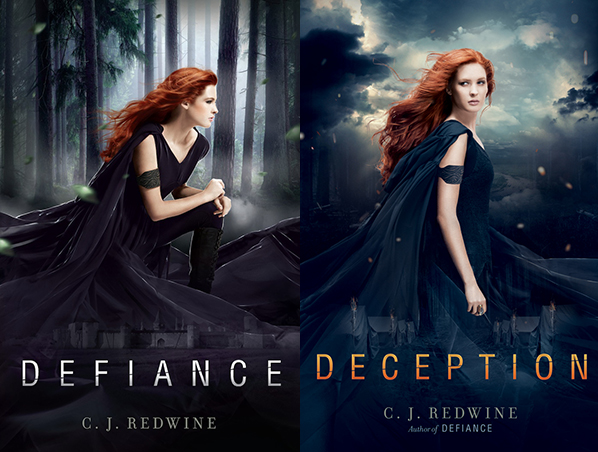 "Defiance" and "Deception" are the first two books in CJ Redwine's "Defiance" trilogy.  It follows Rachel, a girl born in the city of Baalboden, who has never been good at following the rules society set for her. Never being one for knitting or sewing, she much rather spends her time sparring with whoever would be a willing opponent. Having lost her mother really young, it came to her dad to raise her as best as he could. In his eyes, it involved being sure that Rachel can fight for herself.  When the first guy Rachel ever showed any interest to rejects her, it leaves a hole in her heart, and the hurt is something that she never really got over. But instead of letting that hurt get to her, she made use of it. And Logan, the guy in question, can attest to that.  So this is where this story starts. And until it end with Deception, you cannot really catch a real breath. And even then you can't, cause you desperately wait for Deliverance,
Post a Comment
Read more

Three friends, three different lives - how can fifteen weekends change lives?  Since the official synopsis is rather long, I'm bringing you just one sentence to sum up this book! Why not more? Because in the end, that's all you need to know about this book from the start! Going in, I seriously had no idea what to expect. Before getting to know Christy Pastore at a takeover she did on Facebook, I hadn't even heard of her. So I went in blind, hoping this book would be as good as the Goodreads reviews said it was! And it held up to the promises. Why? Because between all the heart-wrenching and aching books I read, this is a really fun and light read to simply enjoy. No tissues or punching bags necessary, just a nice drink and a chair. And that's what I really liked about it - the simplicity. Don't get me wrong, I mean that far from being negative. Sometimes there is beauty in the little things in life.  So back to the book itself:  I loved
Post a Comment
Read more

There are some beings in this world, long thought to be extinct. Some seek to protect them, others want control, but some . . . some are hell bent on their destruction. Audrey was taken from her father, hidden away from the world, and tortured for five years. She was rescued, but is she really safe, or is there someone else waiting to betray her? Can she trust those who saved her? Can she learn to accept who she really is? Stone was on a routine mission to extract valuable information from a rival clan of paranormals. Instead, he and his team find something much more valuable: a scarred, damaged young woman who holds many secrets, and whose power is beyond anything they could ever have imagined.There is much more to Audrey than meets the eye and Stone is determined to protect her. Audrey and Stone are about to find out it’s hard to know who to trust. So... I started reading that book because on of my favo authors actually totally supports that chick... And then I got to know
Post a Comment
Read more
More posts