Showing posts from October, 2014
Show all

Unscripted (The Scripted Series #1) by Christy Pastore Genre : Erotica Romance Publication Date : December 9, 2014 Cover Design :   Mayhem Cover Creations https://www.goodreads.com/author/show/8174674.Christy_Pastore Synopsis “His gaze on me was intense, I couldn’t look away. I felt as if I was revealing my entire soul to him in this moment.”   The range of emotions I had experienced with Ronan felt like a topsy-turvy spinning roller coaster. Suddenly I was awake for the first time in what felt like years. Every fiber of my being was filled with heated desire, passion, lust and fear, and all I wanted was more… more of everything, more of him . How had I just lived these past few years only going through the motions?  But, as glorious as all of this was, was I kidding myself? Could it be real? Or just a moment in time – a few days of thrilling and scary excitement rolled into one? The moment before you hit that first big drop on your favorite coaster, you
Post a Comment
Read more

Synopsis: When it is time for souls to meet, there is nothing on earth that can prevent it from happening. That’s what Emma Finch realizes after her first encounter with Luke Myers. A confirmed bachelor and undercover cop, Luke has made his job his life. Since his first love died tragically in a car accident, Luke hasn’t been seriously interested in anyone … until he meets Emma. Emma is navigating life after her husband of 24 years dies suddenly. Her days as a middle school guidance counselor are filled with hormonal teenagers, while her nights are interrupted by a dream stuck on repeat. A chance meeting with the mystifying detective at a Memorial Day barbeque leaves Emma staring into the same grey eyes that haunt her slumber night after night. She knows her dream will unlock a mystery, and that it’s somehow tied to the tattooed, pierced law-enforcer. As Emma and Luke’s beautiful love story develops, Emma’s dreams become more frequent and frightening. She’s comple
Post a Comment
Read more

Synopsis: Power. Greed. Revenge. Submission.  Sierra Winters never planned on falling for the most powerful man in Sydney.  One minute, she's an everyday twenty-eight-year-old, working class office girl. The next, she’s being blackmailed by Sebastiano Morassi, Sydney's influential crime family boss, to settle her brother's debts.  Sierra knows she should never have gone to him to ‘save’ her brother but she is captivated by him. His monstrous size, his malicious evil glare and more frightening is the scar, which marks his left cheek. Never has she met or seen anyone like him. The more time she spends with this frightening yet captivating man, the harder it becomes to want to escape.  Sebastiano Morassi is pure danger. So why does she crave him? He can make her tremble with fear and make her hairs stand on end, but he also has a sweetness to him, which tugs at her heart. Sierra soon finds herself merged into his world full of murder, revenge, and deceit.  What I
Post a Comment
Read more

Kissing Trouble (In The Dark #2) by Morgana Phoenix

Synopsis: Their screams will be his lullaby. Escaping into the wilderness should have been a piece of cake for a super-babysitter like Julie Brewer. But even she isn’t prepared for the horror awaiting their arrival, or the man who had broken her heart all those years ago to suddenly show up on the doorstep. Mason Brody has a plan and it is simple: wait for Julie to grow up. Yet in no way is he prepared for the fierce amazon who ambushes him with a baseball bat, or the way the shy fifteen year old has blossomed into a beautiful, passionate woman he can't get enough of. But there is so much more than just their past between them. There is a dark force lurking in the shadows, waiting for the chance to appease its hunger for death and it will stop at nothing until it is fed. Can Mason and Julie keep the evil at bay long enough to escape? Or will the monster add their lives to its list? Okay, truth first: I struggled with this review ever since I finished
Post a Comment
Read more

This Christmas by T.E. Ridener 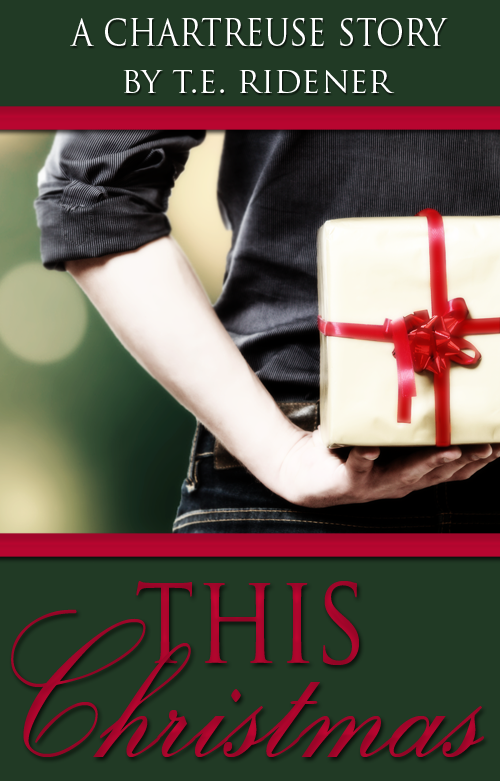 THIS CHRISTMAS: A CHARTREUSE STORY [Available for pre-order here:  AMAZON ] AUTHOR'S NOTE: This story accompanies the novel Chartreuse which is available now. For a better understanding, entertainment, enjoyment, and the sake of not spoiling the ending of the novel, please be sure to read Chartreuse first. This is a M/M romance for those who are curious. If you don't mind the sp oilers and you're just looking for a quick, enjoyable read, please proceed. For Kasen Reed and Rowan Kelly the road to true love has never been easy. Six years after finding each other, things seem to finally be falling in to place. Their love for each other has done nothing but grow. But true love has its faults. Demanding jobs, new business ventures, and general day to day activities have put a distance between the two lovers. Both are at a loss on how to fix it. With the holidays right around the corner and a want to expand their family, our favorite couple must find a way to get back to the
Post a Comment
Read more

It's finally here....The much anticipated cover for Sam Destiny 's debut novel "Set in Flames" !!!! <3 Isn't it gorgeous??? Title: Set In Flames (Morningstar Novel #1) Author: Sam Destiny  Release Date: Winter 2014/2015 Genre: Paranormal Adult Cover Designer: Airicka’s Mystical Creations ( https://www.facebook.com/pages/Airickas-Mystical-Creations/462373910480084 ) Warnings: language, sexual content, violence Intended for Mature Audiences (18+) Synopsis: Maya James is on the run. Her parents aren’t her true parents, her body is acting all kinds of weird lately and she is tired. Really tired. So when she meets a stranger, one that literally makes her world glow, she decides that he might just be the one to help her. Get in, get sleep, get out – that was the plan. She didn’t intend on spending weeks all by herself, resented by the first guy that stirs something other than hate in her - and most of all she didn’t plan o
Post a Comment
Read more

This is gonna be two reviews of books by Jay Crownover!! Be warned, it's immensely hot where those boys came from... Welcome to the Point Synopsis:  There’s a difference between a bad boy and a boy who’s bad . . . meet Shane Baxter. Sexy, dark, and dangerous, Bax isn’t just from the wrong side of the tracks, he is the wrong side of the tracks. A criminal, a thug, and a brawler, he’s the master of bad choices, until one such choice landed him in prison for five years. Now Bax is out and looking for answers, and he doesn’t care what he has to do or who he has to hurt to get them. But there’s a new player in the game, and she’s much too innocent, much too soft…and standing directly in his way. Dovie Pryce knows all about living a hard life and the tough choices that come with it. She’s always tried to be good, tried to help others, and tried not to let the darkness pull her down. But the streets are fighting back, things have gone from bad to worse, an
Post a Comment
Read more
More posts